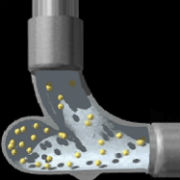 PECO Energy Company’s Eddystone plant employs a scrubbing process using magnesium oxide (MgO) pneumatically conveyed from storage silos to a mixer before being sprayed into the plant’s exhaust stacks — a process necessary to keep the plant in compliance with federal sulfur dioxide emissions standards. Whenever the coal-fired plant is generating electricity, the MgO system must be operational. Elbow failure is not an option.

However, standard 316L stainless pipe elbows that made up the pneumatic conveying system carrying the magnesium oxide powder were wearing out at an average of every four to six months, resulting in environmentally hazardous and costly spillages. Cleanup and repairs were expensive — nearly $4,000 in labor costs annually. Shutdowns of the MgO system threatened to push the plant out of EPA and OSHA compliance; plant engineers needed components that were able to withstand near-constant operation in the long term. You can read the full case study here.

Plant engineer Gavin Heckler found his solution in the Hammertek Smart Elbow® deflection elbow. Six, 3-inch carbon steel elbows were installed to replace the existing stainless steel elbows so prone to failure. Even when operating at full capacity, 24 hours per day, the Smart Elbow products were still going strong a year and a half later, preventing releases of sulfur dioxide and associated cleanup costs.

The secret to the longevity of the Smart Elbow deflection elbow in high-wear and high-volume environments all comes down to intelligent engineering. Conventional elbows rely on impact to change the direction of material passing through them, accelerating wear through friction. In contrast, the Smart Elbow design’s patented Vortex Chamber allows the formation of a slowly rotating ball of material to redirect without contacting the interior surface of the elbow walls. This design feature virtually eliminates any wear to the interior walls of the elbow. No contact and no friction = no wear.

Since its inception almost two decades ago, HammerTek Corporation has established a reputation as an innovative U.S. manufacturer of “problem-solving” conveying elbows. The Smart Elbow deflection elbow is patented in the United States and 15 other countries. For more information, call us at 800-505-9665 or email us at elbows@hammertek.com.